Future Proof Yourself this Valentine’s Day

Being a complete softie myself and with Valentine’s Day looming, I wanted to share a story of love and loss.  I imagine you never thought I’d ever be able to bring romance and Future Proofing Yourself together on the same page!!

Well here we are.  Today, my story is about Woody and Buzz and their competition for the attention and love of a young boy called Andy and how the concept of ‘Future Proofing Yourself’ can be nicely demonstrated by the characters from the animation film Toy Story.

Woody was cast as the leading character… or so he thought.  He was the best friend and trusted toy of a young boy called Andy.  Woody was Andy’s hero. They went everywhere together, fought battles together, travelled together on family outings; wherever Andy went, Woody also went. Woody would be by Andy’s side whenever he needed him, for play or for comfort.

You could describe Woody’s attributes as:

although he did have limited technical skills and his vocabulary wasn’t much to shout about!

Woody was Number One in the toybox and all the other toys held him in high-esteem. They followed Woody and he was the leader and organiser in Andy’s games. They were a great double act and partnership – Happy days!

It was Andy’s birthday and out of nowhere came a new toy called ‘Buzz Lightyear’. Andy had never seen anything quite like Buzz before. It was love at first sight.

Buzz was dynamic with:

Plus, Buzz could shout, “To infinity and beyond”. Andy didn’t know where that was, but it sounded exciting and he was soon to find out. Buzz brought Andy:

But what about poor Woody? He had always been there for Andy, through thick and thin, but now he wasn’t wanted, needed or desired anymore. His skills and attributes had become out-of-date, by just doing the same things he had become the ‘same old, same old’ Woody — he had become a routine in Andy’s life.

By now Andy loved his new partner Buzz and they started out on new adventures; they went into space and of course, to infinity and beyond! Buzz could do anything and take Andy and his imagination anywhere they wanted to go.

Woody was reduced to just another toy in the playroom along with all the other toys. Then, as Andy became older, there was a real threat that they would all become redundant and disregarded. Packed off in boxes to charity shops or worse still to the dump! Something which they all worried about.

The truth is that, unfortunately, Woody hadn’t ‘Future Proofed’ himself. He hadn’t seen the day coming when his attributes and skills could become out-of-date. Woody’s thinking, the way he communicated, the way he functioned and the way he worked had not moved with the times. He had become stale. He hadn’t looked after himself — he was no longer needed and was of no value to Andy.

So, the serious point to this story is, “Are we all being pro-active and ‘Future Proofing Ourselves’?”

Looking forward, we will all probably have to keep working until we are older than our parent’s generation, given the increased competition for our services, the squeeze on pensions and the happy prospect of increased life expectancy. So, there will still be time after retirement for cruises around the world and our own new adventures… but we will need to pay for it!

So how can we continue to represent an attractive proposition and a good investment for our clients and our employers?

So, come on, let’s all be Buzz Lightyears! Full of Buzz, let’s inspire our own imagination and the imaginations of others… create new beginnings, take our clients on new adventures ‘To Infinity and Beyond’… let’s all go and Future Proof Ourselves with new skills and thinking.

Remember: if you don’t look after yourself, who’s going to do it for you?

We wouldn’t want to all end up like Woody, would we?

Extracts taken from the Introduction – Future Proof Yourself by David Yeabsley.

You can find more details on this and other future proofing yourself ideas in my new book: Future Proof Yourself via:

The Endless Bookcase or Amazon 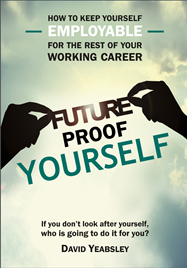